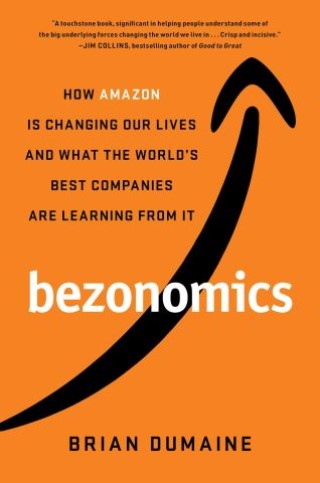 An in-depth, revelatory, and unbiased look at Amazon’s world-dominating business model, the current competitors either imitating or trying to outfox Amazon, and the ways Bezonomics is shaping the life of every American consumer—from an award-winning Fortune magazine writer.

Like Henry Ford, Sam Walton, or Steve Jobs in the early years of Ford, Walmart, and Apple, Jeff Bezos is the business story of the decade. Bezos, the richest man on the planet, has built one of the most efficient wealth-creation machines in history with 2% of US household income being spent on nearly 500 million products shipped from warehouses in seventeen countries. Amazon’s business model has not only turned the retail industry and cloud computing inside out, but now its tentacles are squeezing media and advertising, and disrupting the state of technology, the economy, job creation, and society at large. Amazon’s impact is so pervasive that business leaders in nearly every sector around the world need to understand how this force of nature operates.

Based on unprecedented behind-the-scenes reporting from 150 sources inside and outside of Amazon, Bezonomics unveils the underlying principles Jeff Bezos uses to achieve his dominance—customer obsession, extreme innovation, and long-term management, all supported by artificial intelligence—and shows how these are being borrowed and replicated by companies across the United States, in China, and elsewhere. Brian Dumaine shares tips for Amazon-proofing your business. Most important, Bezonomics answers the fundamental question: How are Amazon and its imitators affecting the way we live, and what can we learn from them?

A goldmine for some, and a threat for others, “Bezonomics” has become a life-shaping force both now and in the future that every American must know more about.

Brian Dumaine: Brian Dumaine is an award-winning journalist and a contributing editor at Fortune magazine. In addition to Bezonomics his works include The Plot to Save the Planet, and, with three coauthors, Go Long: Why Long-Term Thinking Is Your Best Short-Term Strategy. He and his wife live in New York.