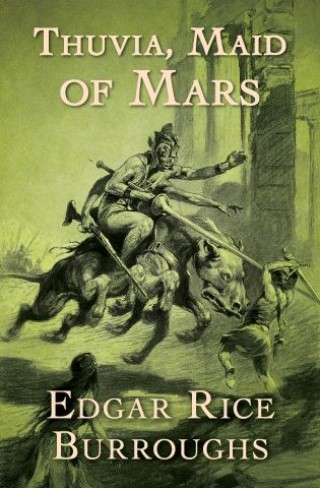 The sci-fi fantasy saga continues in this sequel to Warlord of Mars: Carthoris must save princess Thuvia from aliens capable of telepathic projection.

Carthoris of Mars, prince of Helium, has inherited the strength and heroism of his Earth-born father, John Carter. Though he has fallen in love with Thuvia, princess of Ptarth, she has already been promised to Kulan Tith, Jeddak of Kaol. And on the planet of Barsoom—known to humans as Mars—only death can break an engagement. When Thuvia is kidnapped, Carthoris is blamed. But while rising tensions bring the red planet to the brink of war, it is Carthoris who flies to her rescue.

In the untamed south of Barsoom, Carthoris pursues Thuvia’s captors into the ancient land of Lothar, home to a mysterious race of aliens with the ability to conjure phantom armies with their minds. Now Carthoris must fight a seemingly infinite number of enemies to save Barsoom from planetary war and win the love of Thuvia.

Edgar Rice Burroughs:
Edgar Rice Burroughs was an American fiction writer best known for his celebrated and prolific output in the adventure and science-fiction genres. Among the most notable of his creations are the jungle hero Tarzan, the heroic Mars adventurer John Carter, and the fictional landmass within Earth known as Pellucidar.