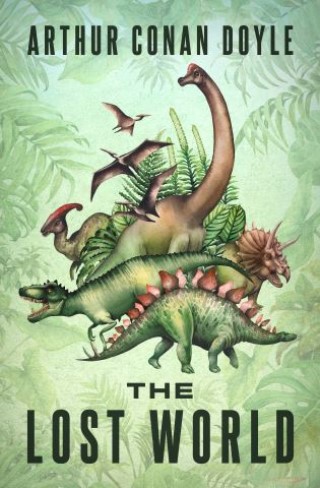 A dangerous expedition into the Amazon Basin reveals a land of living dinosaurs in this classic science fiction novel by the creator of Sherlock Holmes.

When Professor Challenger, a famous paleontologist, reports that he has discovered dinosaurs living on a remote plateau in South America, he is met with ridicule from the scientific community, particularly his rival, Professor Summerlee. With the help of a young reporter and an experienced adventurer, the two academics make a return trip to the Amazon Basin in order to verify Challenger’s claims. But what they encounter there is more incredible—and dangerous—than anyone thought possible.

Successfully reaching the remote plateau Challenger described, the expedition team is soon trapped in a land of pterodactyl attacks and dangerous tribes of ape men. Their findings will turn the scientific world on its head . . . if only they can get out alive.

Arthur Conan Doyle:
Arthur Conan Doyle (1859–1930) practiced medicine in the resort town of Southsea, England, and wrote stories while waiting for his patients to arrive. In 1886, he created two of the greatest fictional characters of all time: the detective Sherlock Holmes and his partner, Dr. Watson. Over the course of four novels and fifty-six short stories, Conan Doyle set a standard for crime fiction that has yet to be surpassed.