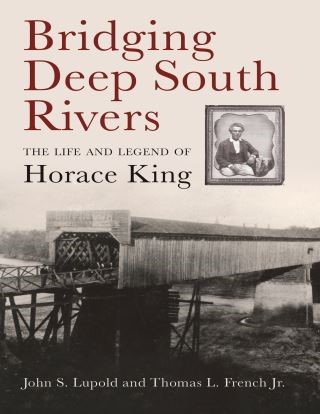 The Life and Legend of Horace King

Horace King (1807-1885) built covered bridges over every large river in Georgia, Alabama, and eastern Mississippi. That King, who began life as a slave in Cheraw, South Carolina, received no formal training makes his story all the more remarkable. This is the first major biography of the gifted architect and engineer who used his skills to transcend the limits of slavery and segregation and become a successful entrepreneur and builder.

John S. Lupold and Thomas L. French Jr. add considerably to our knowledge of a man whose accomplishments demand wider recognition. As a slave and then as a freedman, King built bridges, courthouses, warehouses, factories, and houses in the three-state area. The authors separate legend from facts as they carefully document King’s life in the Chattahoochee Valley on the Georgia-Alabama border. We learn about King’s freedom from slavery in 1846, his reluctant support of the Confederacy, and his two terms in Alabama’s Reconstruction legislature. In addition, the biography reveals King’s relationship with his fellow (white) contractors and investors, especially John Godwin, his master and business partner, and Robert Jemison Jr., the Alabama entrepreneur and legislator who helped secure King’s freedom. The story does not end with Horace, however, because he passed his skills on to his three sons, who also became prominent builders and businessmen.

In King’s world few other blacks had his opportunities to excel. King seized on his chances and became the most celebrated bridge builder in the Deep South. The reader comes away from King’s story with respect for the man; insight into the problems of financing, building, and maintaining covered bridges; and a new sense of how essential bridges were to the southern market economy.