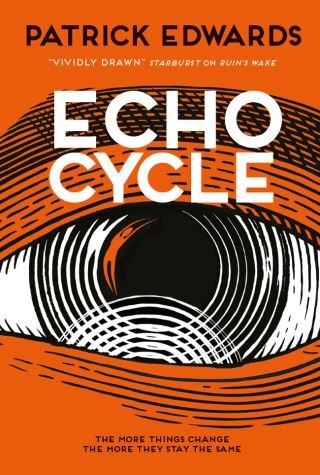 Fleeing disaster, young Winston Monk wakes to find himself trapped in the past, imprisoned by the mad Emperor Nero. The Roman civilization he idolized is anything but civilized, and his escape from a barbaric home has led him somewhere far more dangerous.

As the European Union crumbled, Britain closed its borders, believing they were stronger alone. After decades of hardship, British envoy Lindon Banks joins a diplomatic team to rebuild bridges with the hypermodern European Confederacy. But in Rome, Banks discovers his childhood friend who disappeared without a trace. Monk appears to have spent the last two decades living rough, but he tells a different story: a tale of Caesars, slavery and something altogether more sinister.

Monk's mysterious emergence sparks the tinderbox of diplomatic relations between Britain and the Confederacy, controlled by shadowy players with links back to the ancient world itself...

Patrick Edwards: Patrick Edwards lives in Bristol, U.K. with his family and has never grown out of his fascination with the future. He spent his childhood in France, India and Indonesia and studied French at Bristol University, which included a year in a garret studio in Paris writing moody stories when he should have been working. In 2015 he graduated from Bath Spa University's Creative Writing MA and his first novel, Ruin's Wake, was published in 2019. Ruin's Wake is a finalist in the Best Novel category of the Prometheus Awards.