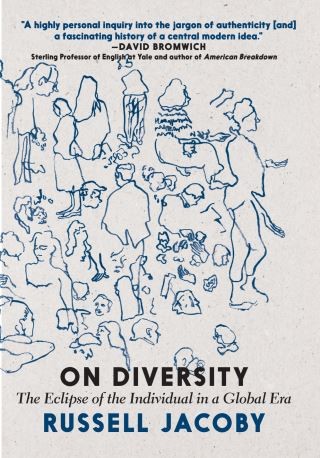 The Eclipse of the Individual in a Global Era

A brilliant examination of a timely concept from one of the nation's great public intellectuals.

Diversity. You've heard the term everywhere--in the news, in the universities, at the television awards shows. Maybe even in the corporate world, where diversity initiatives have become de rigueur. But what does the term actually mean? Where does it come from? What are its intellectual precedents? Moreover, how do we square our love affair with diversity with the fact that the world seems to be becoming more and more, well, homogeneous? With a lucid, straightforward prose that rises above the noise, one of America's greatest intellectual gadflies, Russell Jacoby, takes these questions squarely on. Discussing diversity (or lack thereof) in language, fashion, childhood experience, political structure, and the history of ideas, Jacoby offers in plain language a surprising and penetrating analysis of our cultural moment. In an age where our public thinkers seem to be jumping over one another to have the latest correct opinion, Jacoby offers a most dangerous, and liberating, injunction: to stop and think.

Russell Jacoby: Russell Jacoby’s books range in topic from the place of psychology in American society (Social Amnesia: A Critique of Conformist Psychology) to the role of utopian thought (The End of Utopia: Politics and Culture in the Age of Apathy) and the origins of violence (Bloodlust: On the Roots of Violence from Cain and Abel to the Present). His The Last Intellectuals: American Culture in the Age of Academe introduced into the lexicon the term “public intellectual” and is considered one of the essential texts of American letters. Originally from New York, he has a PhD in history from the University of Rochester, where he worked with Christopher Lasch. He lives in Los Angeles and teaches history at UCLA. In 2017 Jacoby was short-listed for the Times Literary Supplement’s All Authors Must Have Prizes Prize.