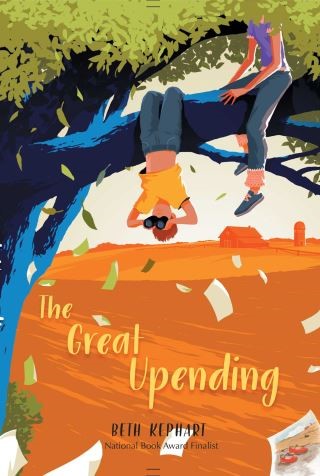 When a troubled children’s book author moves to their farm, two kids with troubles of their own hatch a scheme to swipe the ending of the final book in a bestselling series to get a reward from the book’s publisher in this gorgeously written novel in the tradition of Wonder and Out of My Mind.

Twelve-year-old Sara and her brother Hawk are told that they are not to bother the man—The Mister—who just moved into the silo apartment on their farm. It doesn’t matter that they know nothing about him and they think they ought to know something. It doesn’t matter that he’s always riding that unicycle around. Mama told them no way, no how are they to bother The Mister unless they want to be in a mess of trouble.

Trouble is the last thing Sara and her brother need. Sara’s got a condition, you see. Marfan syndrome. And that Marfan syndrome is causing her heart to have problems, the kind of problems that require surgery. But the family already has problems: The drought has dried up their crops and their funds, which means they can’t afford any more problems, let alone a surgery to fix those problems. Sara can feel the weight of her family’s worry, and the weight of her time running out, but what can a pair of kids do?

Well, it all starts with…bothering The Mister.

Beth Kephart: National Book Award finalist Beth Kephart is the critically acclaimed author of nearly two dozen books for both adults and young readers. Her recent, Wild Blues, was named an ALA Youth Editor’s Choice. Her other novels—including Undercover, Small Damages, and One Thing Stolen—have been also featured on numerous best book lists. She is an award-winning lecturer at the University of Pennsylvania where she teaches creative nonfiction and fiction. She lives in Devon, Pennsylvania.