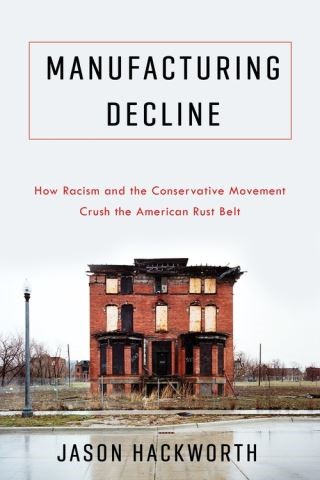 How Racism and the Conservative Movement Crush the American Rust Belt

For decades, the distressed cities of the Rust Belt have been symbols of deindustrialization and postindustrial decay, their troubles cast as the inevitable outcome of economic change. The debate about why the fortunes of cities such as Detroit have fallen looms large over questions of social policy. In Manufacturing Decline, Jason Hackworth offers a powerful critique of the role of Rust Belt cities in American political discourse, arguing that antigovernment conservatives capitalized on—and perpetuated—these cities’ misfortunes by stoking racial resentment.

Hackworth traces how the conservative movement has used the imagery and ideas of urban decline since the 1970s to advance their cause. Through a comparative study of shrinking Rust Belt cities, he argues that the rhetoric of the troubled “inner city” has served as a proxy for other social conflicts around race and class. In particular, conservatives have used images of urban decay to craft “dog-whistle” messages to racially resentful whites, garnering votes for the Republican Party and helping justify limits on local autonomy in distressed cities. The othering of predominantly black industrial cities has served as the basis for disinvestment and deprivation that exacerbated the flight of people and capital. Decline, Hackworth contends, was manufactured both literally and rhetorically in an effort to advance austerity and punitive policies. Weaving together analyses of urban policy, movement conservatism, and market fundamentalism, Manufacturing Decline highlights the central role of racial reaction in creating the problems American cities still face.