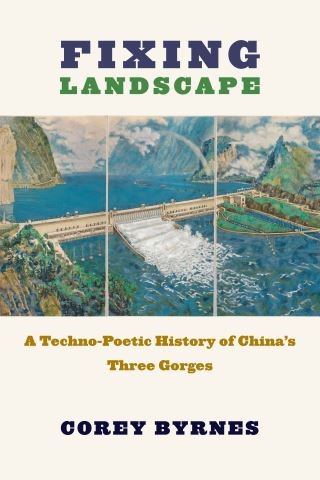 In 1994, workers broke ground on China’s Three Gorges Dam. By its completion in 2012, the dam had transformed the ecology of the Yangzi River, displaced over a million people, and forever altered a landscape immortalized in centuries of literature and art. The controversial history of the dam is well known; what this book uncovers are its unexpected connections to the cultural traditions it seems to sever. By reconsidering the dam in relation to the aesthetic history of the Three Gorges region over more than two millennia, Fixing Landscape offers radically new ways of thinking about cultural and spatial production in contemporary China.

Corey Byrnes argues that this monumental feat of engineering can only be understood by confronting its status as a techno-poetic act, a form of landscaping indebted to both the technical knowledge of engineers and to the poetic legacies of the Gorges as cultural site. Synthesizing methods drawn from premodern, modern, and contemporary Chinese studies, as well as from critical geography, art history, and the environmental humanities, Byrnes offers innovative readings of eighth-century poetry, paintings from the twelfth through twenty-first centuries, contemporary film, nineteenth-century British travelogues, and Chinese and Western maps, among other sources. Fixing Landscape shows that premodern poetry and visual art have something urgent to tell us about a contemporary experiment in spatial production. Poems and paintings may not build dams, but Byrnes argues that the Three Gorges Dam would not exist as we know it without them.