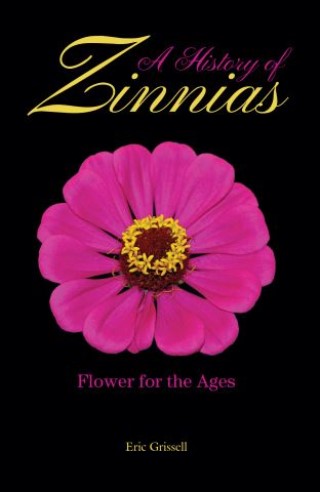 A History of Zinnias

Flower for the Ages

A History of Zinnias brings forward the fascinating adventure of zinnias and the spirit of civilization. With colorful illustrations, this book is a cultural and horticultural history documenting the development of garden zinnias—one of the top ten garden annuals grown in the United States today.

The deep and exciting history of garden zinnias pieces together a tale involving Aztecs, Spanish conquistadors, people of faith, people of medicine, explorers, scientists, writers, botanists, painters, and gardeners. The trail leads from the halls of Moctezuma to a cliff-diving prime minister; from Handel, Mozart, and Rossini to Gilbert and Sullivan; from a little-known confession by Benjamin Franklin to a controversy raised by Charles Darwin; from Emily Dickinson, who writes of death and zinnias, to a twenty-year-old woman who writes of reanimated corpses; and from a scissor-wielding septuagenarian who painted with bits of paper to the “Black Grandma Moses” who painted zinnias and inspired the opera Zinnias.

Zinnias are far more than just a flower: They represent the constant exploration of humankind’s quest for beauty and innovation.

Eric Grissell was born in Washington, DC, but spent his childhood in the San Francisco Bay Area. After obtaining a PhD in entomology from the University of California, Davis, he began work at the Florida Department of Agriculture and Consumer Services identifying wasps, bees, and ants of agricultural importance. He eventually became a research entomologist for the US Department of Agriculture’s Systematic Entomology Laboratory, stationed at the Smithsonian National Museum of Natural History in Washington, DC. He retired after twenty-six years of service and moved first to Arizona and then to Eugene, Oregon. Although primarily trained as an entomologist, Grissell’s second love is botany and horticulture. His first book of garden essays, entitled Thyme on My Hands, appeared in 1986, followed by A Journal in Thyme in 1994. Incorporating entomology, botany, and horticulture together, he published the award-winning Insects and Gardens in 2001 and Bees, Wasps, and Ants in 2010. Grissell has published over one hundred scientific papers on insects and a dozen garden essays for popular horticultural magazines.